The Mayflower 2016 Midwest Tour - In Review

2012 was the first year I exhibited at a comic book convention to promote my art. I had attended cons as a fan of the medium for as long as I can remember, but that initial leap to the other side of the table was nerve-wracking when I finally took it.

The experience ended up going wonderfully and I was blown away by its ability to motivate and justify my aspirations. Although the Internet can be a great outlet for art, the feedback and reactions you get never feel the same as someone in the flesh getting excited by your work. I left that Planet ComiCon in Overland Park wanting to drive home and immediately start my magnum opus... though I probably just fell asleep - I always underestimate how much sitting behind a table all day can exhaust you!

I was incredibly lucky in randomly getting sat next to Seth Wolfshorndl who is, without hyperbole, the nicest guy I've ever met at a convention. He set the tone for the kind of table I wanted to present and the outlook I wanted to have for my own convention experience. I probably would have quickly become a cynical jerk if that first con had started on a different note. Instead, I couldn't wait to table again the next year.


After I had a number of local cons under my belt and started making my own comic, Mayflower, I took a step out of my comfort zone once again and ventured to the 2015 O Comic Con in Omaha. My first real 'away con', Omaha ended up going perfectly and even provided a profit despite travel expenses! This success was the catalyst for signing up for many more away cons for 2016 and what I coined "The Mayflower Midwest Tour".


From Spacedock to the Delta Quadrant 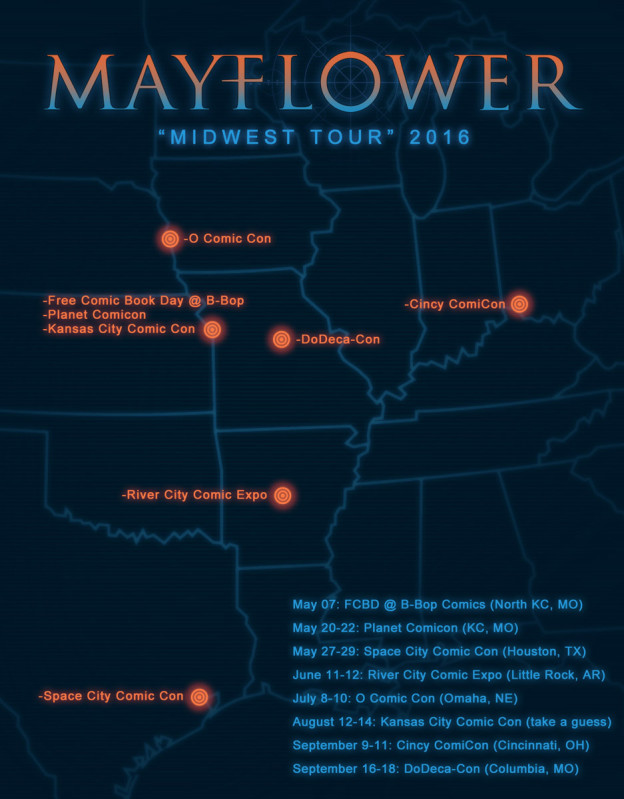 Planet ComiCon
This was the fifth time exhibiting at my 'home con' so they're actually starting to blend together in my memory, but I always do well here. This is mostly thanks to no travel expenses, which means there is a lower threshold to cross to be successful. It's also where I see the most returning Mayflower readers which is the single best form of motivation to keep making the comic (besides coffee)!

2016's Planet ComiCon had a slightly higher table cost and for me, slightly worse sales than previous years (which seemed to be a shared experience among creators). Some theorized that Stan Lee's big appearance shifted visitors' spending priorities. That may be true, but I also think it may come down to the staggering number of artist alley tables that the con sells now. It's pretty hard for an attendee to not be burnt out after the fiftieth sales pitch they've heard -  let alone the hundreth and beyond!

We had such high hopes! And extended vacation plans along the coast! Oh, how wrong we were...

The first trial of this gauntlet was staying alive and sane through Dallas traffic on the journey there. Remember Mousetrap? It was city-sized version of that. And we weren't even there at rush hour...

The next trial came shortly after. We went from driving in perfect weather to a blinding maelstrom on a crowded highway in the matter of seconds. Visibility was reduced to five feet ahead. Semis and overpasses materialized out of nothing right in front of us. To get down a section of highway that would have normally taken five minutes took us an hour, our hands tight and mouths grimaced the entire time. We survived and made it to Houston... but we should have taken that storm as an omen.


Even during exhibitor sign-in something about the con felt a little off. There seemed to be miscommunication happening between show organizers, volunteers, and the convention hall staff. The hall itself was large, but the layout bizarre; at times it was labyrinthian, other times wide open and bare.

The con started the next day with little fanfare, no announcements (which continued for most of the show), and very few people. The prices at the door turned out to be very expensive and VIP lines ended up longer than the standard ones. Magicians were placed distractingly in the middle of an aisle between famous comic creators. Few restrictions and regulation meant some booths had music, spotlights, and ten-foot-tall print towers distracting attendees from nearby tables. We even experienced a booth across from us stand in front of their table with a puppy to draw people in and away from us.

Rumors also began to spread about celebrity guests not being informed of their own panels, AV teams not being paid, and even the Sons of Anarchy cast being conned out of their money. Ron Pearlman and Danny Trejo are not people you want to make angry! And it turns out... most of what we heard was true!

I would highly recommend everyone, from exhibitors to attendees, to pass on this con - that is, if it somehow manages to resurrect itself from this disaster and the subsequent lawsuits.

After the con, we headed south to the coast with what was left of our optimism, assuming a Monday would be a good time to visit... that is until we realized it was Memorial Day weekend. Mountains of litter and swarms of mosquitos sent us packing within the hour in true misery.

...In a way though, it was a fitting finale for the trip!


River City Comic Expo
The drive south from Kansas City to Arkansas gets prettier as you go along, especially around the border. Rolling hills covered in woods accompany you as you curve around La Fayette and head towards Little Rock. Once there, the town itself reminded me of Kansas City, from its metro layout to the general tone around downtown and the attitudes of the people themselves.

This was a small con but it was balanced well with quality vendors and guests. I got to speak to G.I. Joe myth-builder, Larry Hamma, and meet artist and inker, Tom Feister, as well as the granddaughter of the legendary Frank Frazetta.

Attendance and sales were on the low side, but still decent for a young convention. I likely can't justify the cost next year but I'll keep an eye on it for the future!

O Comic Con
Pretty great once again! A medium-sized event and the only game in town - perfect for comic creators! See my in-depth post about it here.


Kansas City Comic Con
Great people, but slow. I hope it continues to focus on the comic side of things in the future as it finds its niche. Post here.


Cincy ComiCon
A con about comics! Cool, authentic, great creators, but as the underdog fighting off the bigger con in town, this one ended up a little slow. Full post here.


Do-Deca Con
This was a small convention in Columbia, MO, that I tried due to its proximity. I initially thought the location (a wide hallway inside a stripmall) would spell doom for me, but I ended up making enough to justify the table and the hotel night required to exhibit. I think the only downside was that the convention seemed geared a bit more towards anime and novels and was light on the comics-side of things. It will be interesting to see how it grows in subsequent years, though, and it's always a bit bizarre to return to where I lived for four years. The new comic shop in town, Distant Planet, really shines in quality and atmosphere!


Challenges In the Experiment

Looking back, here were the main issues I faced during the tour:

Losing Money
Only the #1 and #2 cons of the above list concerning profits of away cons were actually positive numbers. Every other con, with tables, hotels, and gas added up, were net losses. Cincy and River made back about half of the expenses; Space City was a big loss.

This doesn't mean they were bad conventions or experiences (well, expect for Space City), and I'm certainly not in the field of comic books for the hoarding of gold, but it does mean my objective to grow Mayflower in printings and appearances gets curtailed temporarily. I have to choose cons wisely so that I can keep this project a positive vector and not a wallet-suck. The trouble is that today there are so many cons popping up it's almost impossible to predict how they're going to go. Until the current flare up of events dies down, it seems like trial-and-error is the only way to find out.

Losing Motivation
As I described at the start of this write-up, there are powerful and unique things that a convention can give to an artist - from meeting new readers to discovering similar creators that you can swap war stories and critiques with. There's inspiration, motivation, and more.

...But sometimes that magic doesn't happen, especially when exhibiting becomes routine. The more you do it and the more the cons start to blend together, the less potent the good vibes can be.

Worse, when attendance and sales are low, and you haven't seen the sky in eight hours, you can start to get cynical - about other exhibitors, about the convention as a whole, or, if you're like me, about yourself and this insane career path you're attempting.

There were also times when I felt like a sheep in a wolf pack, foolishly attempting to sell a somewhat-quiet book about space in the midst of a loud, medieval bazaar. When there's piles of trending, licensed memorabilia (some of which I own, of course) on your left and artists advertising their work with spinning neon lights and aforementioned puppies on your right, you start to feel out of a place. As you see your potential audience skip the entire aisle to avoid your neighbor who is yelling at every person who walks by, you wonder if you're helping your project at all.

...Perhaps breaking into libraries and shelving copies of your comics (and entering them into their computer system) is a better way to go? 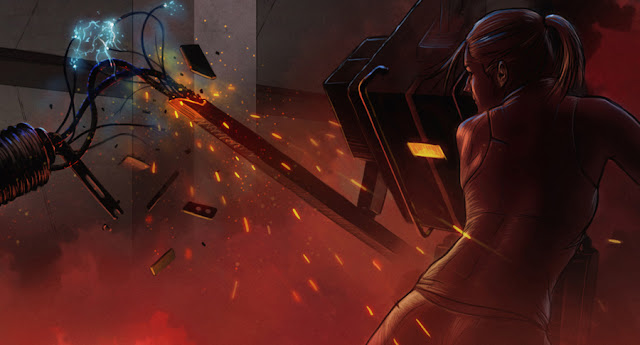 There we are! 2017 will be a little less busy for me as I try to recoup some of the losses from this experiment. But in 2018, I plan to hit some of the bigger cons in the nation with the complete first arc of Mayflower in towe.

I hope some of this write-up may be helpful for other creators taking their art on the road! 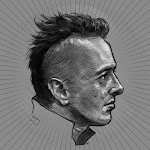